Civilization and the Discontented

Christopher Bollas with Join Community West to examine the historical, psychological and cultural development of the nation-state. We are in the midst of catastrophic change, one that lays bare an evolutionary gap that society appears ill-equipped to navigate.

Bollas will explore the role of civilization as a potential transformational object – one that may bridge this evolutionary gap and foster a world that is beyond survivable, but one that is both humane and generative. 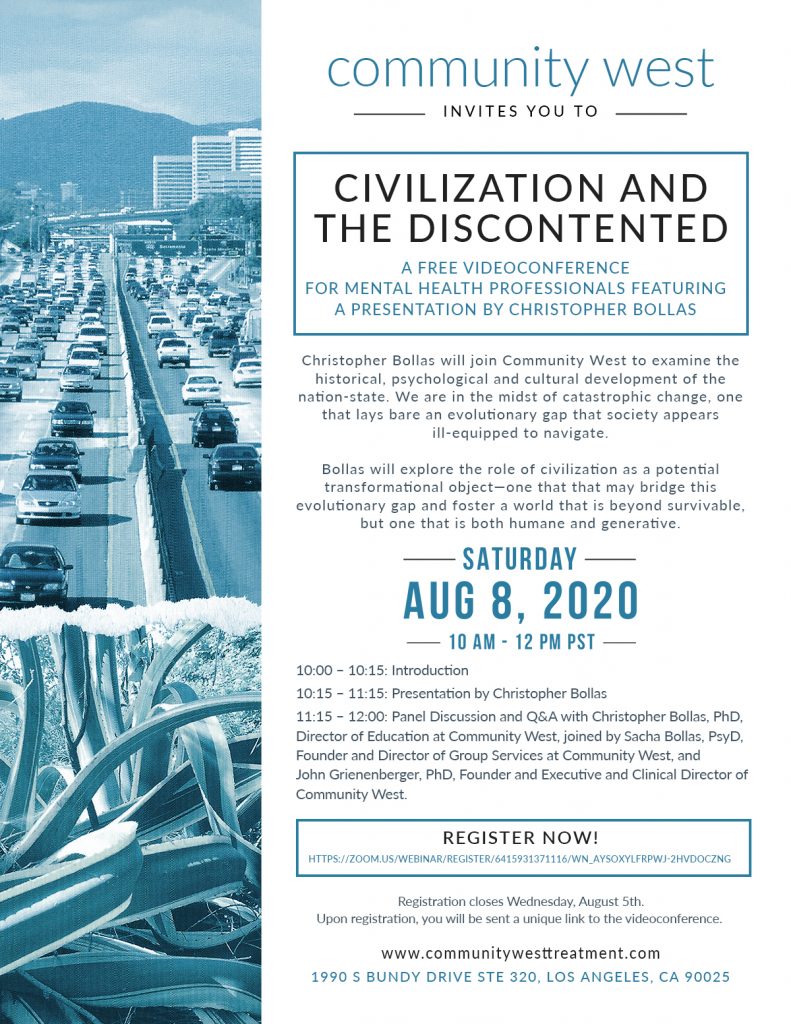 Registration closes Wednesday, August 5th. Upon registration, you will be sent a unique link to the videoconference.

We are in living in a time of great unrest, instability and catastrophic change—change that exposes an evolutionary gap that we are struggling to bridge. Christopher Bollas will explore the convergence of the pandemic and right wing populism as a confluence that puts our wellbeing at great risk. As the United States lurches forward towards the presidential election in November, Bollas will discuss Donald Trump and the right wing’s approach to solve problems of complexity by retreating into psychotic processes. He will provide a framework for understanding and addressing these sorts of processes within a larger collective group: the nation state.

His core argument is that civilizations need both a more sophisticated understanding of group psychology and a use for those psychologists, therapists, and other mental health professionals who understand the labile and dangerous nature of group “thinking”.  Although we all know what it is like to be part of formative groups—our family, our school, our work group, etc.—we are surprisingly naïve at understanding how to be effective participants in the large group we term a nation, or the even larger group we define as a global community, formed by international relations.  Failing to adequately address this latter challenge has left us rudderless in an increasingly hazardous world.

Christopher Bollas graduated from the University of California-Berkeley with a degree in history. He studied intellectual history with Carl Schorske, American history with Kenneth Stampp, political theory with Sheldon Wolin, and psychoanalytical studies with Frederick Crews and Alan Dundes. He gained a PhD at the University of Buffalo in English literature where he studied with Norman Holland, Leslie Fiedler, Rene Girard, Michel Foucault, Robert Hass, and Angus Fletcher.

His first book The Shadow of the Object: Psychoanalysis of the Unthought Known was published in 1987 and his most recent work Meaning and Melancholia: Life in the Age of Bewilderment was published in 2018 (Routlegde). He is the author of many works of nonfiction, three novels, and five plays. His works have been published in Swedish, Danish, German, French, Italian, Spanish, Portuguese, Japanese, Chinese, Hebrew, Turkish, Romanian, Ukranian, and Serbian.

He has been described by The Townsend Center (UC-Berkeley) in 2016 as “the most influential psychoanalyst writing in English today”, by Al-Haaretz in 2010 as “one of the two most important living theoreticians in the world of psychoanalysis” and by Adam Phillips as “the most evocative psychoanalytic writer we have”.

John F. Grienenberger, PhD is a licensed clinical psychologist and developmental researcher. He is the former Clinical Director of Psychological Care and Healing (PCH) Treatment Center in Mar Vista, California (2012-2016). In addition to his work at Community West, he also currently serves as the Co-director of the non-profit Center for Reflective Communities, where he founded and developed the Reflective Parenting Program and the Reflective Care Program. Most recently, he was awarded a major federal grant from NICHD to do a randomized-control trial study of his mentalization-based intervention with at-risk families. He has authored numerous papers and presentations and conducted trainings and presentations nationally and internationally. He has extensive experience in psychodynamic psychotherapy and mentalization-based individual and family work, and has trained hundreds of therapists in his mentalization-based model of treatment.

Sacha Bollas, PsyD, Msc  was born and raised in the United Kingdom where he studied as a fine artist (sculpture) before receiving a BA in Art History and Cultural Studies at Sussex University. He earned a Master of Science Degree at University College London Psychology department, received his clinical psychology doctorate from the Wright Institute in Berkeley California and is a Senior Candidate in psychoanalytic training at the Los Angeles Institute and Society of Psychoanalytic Studies (LAISPS).  He has lectured extensively on the psychodynamics of eating disorders, and is presently teaching and supervising postdoctoral fellows at the Wright Institute Los Angeles. His clinical interests include the treatment of depression, anxiety, bipolar disorder, eating disorders, schizophrenia and trauma. He has extensive experience applying his knowledge of clinical psychology and psychoanalysis to creating meaningful and effective treatment programs that address the transition from adolescence to adulthood.